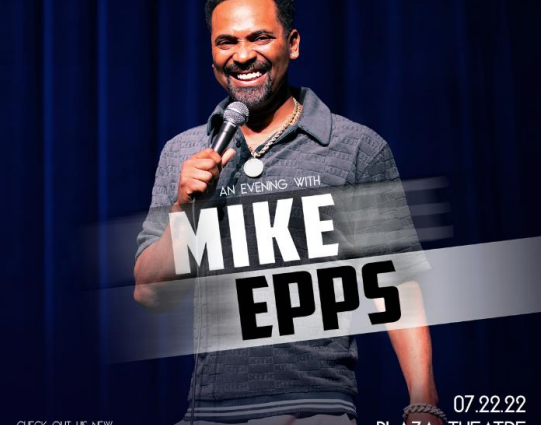 Tickets to go on sale Friday, June 17th at 10AM LOCAL

El Paso, Texas — El Paso Live and Red Tail Entertainment welcomes actor and comedian, Mike Epps, to the Plaza Theatre on July 22, 2022. Tickets go on sale to the public at 10 a.m. on Friday, June 17 on elpasolive.com and ticketmaster.com. Ticket prices are subject to change.

In the last couple of years, Epps was seen in the Amazon feature “Troup Zero” starring opposite Viola Davis, Allison Janney, and Jim Gaffigan; and in the A24 film “The Last Black Man in San Francisco” which both premiered at the 2019 Sundance Film Festival. In 2019, his fifth stand up special “Just One Mike” premiered on Netflix last fall, and he starred opposite Eddie Murphy in the comedy “Dolemite is my Name” which was nominated for Golden Globe, Broadcast Film Critic Awards, and a NAACP Image Award. In 2017 Harper Collins published his first book, Unsuccessful Thug about his life growing up around violence and how comedy gave him a better life.

In 2011, he was awarded an NAACP Image Award for “Best Supporting Actor” for his role in the Sony Pictures film, “Jumping the Broom.” He continued to receive critical praise for his dramatic turn in 2012 with “Sparkle,” opposite Whitney Houston and Jordan Sparks. In 2016 he further pursued his dramatic side with two important roles: starring opposite Forest Whitaker and Anthony Mackie in the Lionsgate thriller, “Repentance,” being released through Lionsgate/Codeblack Entertainment., followed by the independent Nina Simone biopic, “Nina,” starring Zoe Saldana. In “Nina,” he plays the legendary Richard Pryor, who opened for the singer in the early sixties.

He is also currently on a national stand-up tour and since 2000, Epps steadily climbed his way up the standup comedy ranks when he was recognized by a national audience in 1995 for appearing on HBO’s Def Comedy Jam (which, years later, he would go on to host). During a performance at LA’s Comedy Store, Epps caught the attention of Ice Cube. This led to the first of three feature films they would do together: the cult hits “Next Friday,” “Friday after Next,” and “All About the Benjamins.”