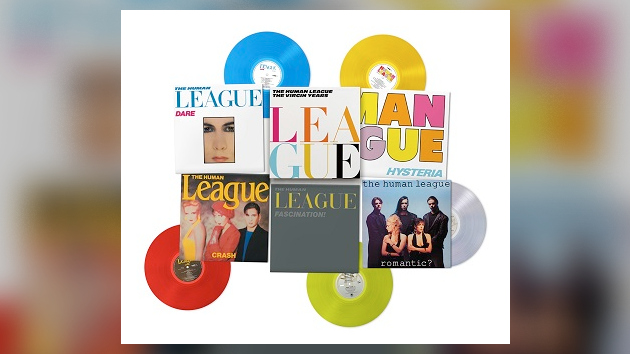 The Human League is releasing a new limited-edition colored-vinyl box set featuring four LPs and an EP issued on the Virgin Records label from 1981 through 1990 on November 11.

The box set can be preordered now at Amazon and uDiscoverMusic.

Dare was The Human League’s third studio album and marked the start of the group’s second, more pop-oriented incarnation, which was led by singer/keyboardist Philip Oakey and showcased female vocalists Joanne Catherall and Susan Ann Sulley.

The record, which peaked at #3 on the Billboard 200, featured the chart-topping “Don’t You Want Me Baby” as well as the top-10 U.K. hits “Love Action (I Believe in Love)” and “Open Your Heart.”

Hysteria featured three tunes that reached the top-20 of the U.K. singles tally: “The Lebanon,” “Life on Your Own” and “Louise.”

Finally, Romantic? — which brought the band’s stint on Virgin to a close — featured the top-40 single “Heart Like a Wheel.”