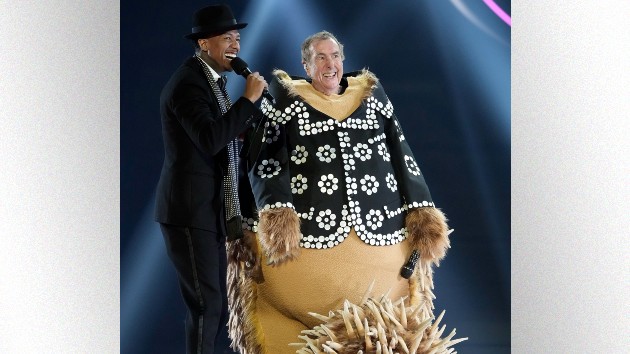 The current season of Fox’s The Masked Singer marks the first time any contestant performed a song by The Beatles: It was “Love Me Do,” sung by The Hedgehog, later unmasked as Monty Python legend Eric Idle. Idle personally asked Paul McCartney for permission to sing the song, but he claims he wasn’t sure Paul would give it to him — because of something Idle did more than 40 years ago.

After his unmasking, Idle told viewers that while Paul had given him permission, he’d added, “Please tell me what show it is, so I can make sure to avoid it.” Idle tells Yahoo that Paul’s joke, and his trepidation about asking him for permission, stem from Idle’s 1978 film spoof of The Beatles — The Rutles: All You Need Is Cash.

“I have a friend who worked at Apple in London, and he said, ‘I think Paul will have forgiven you by now,'” Idle tells Yahoo. “Because, you know, I played [Paul] in The Rutles.” The portrayal wasn’t particularly flattering.

Idle says, “My wife and I bumped into him … shortly after [the movie came out], and he said, ‘Oh, I’m not sure we’re talking to you!’ Obviously, he wasn’t  quite so comfortable in those days.”

But eventually, Paul came around. He even sent out a tweet promoting The Masked Singer, writing, “I have heard whispers that a pal of mine is on America’s #TheMaskedSinger…Best of luck friend! Sing with all your heart!“

The Beatles were actually big Monty Python fans, and Idle and George Harrison were extremely close; Harrison even mortgaged his house to finance the comedy troupe’s classic film Life of Brian.

“He was a remarkable man. He really changed my life,” Idle says of Harrison, who died in 2001. “I’d never had a friend like that.”

2022-09-23
Previous Post: Mama Cass Elliott to receive star on Hollywood Walk of Fame on “Monday, Monday,” October 3
Next Post: Pigs on the wing: Is Pink Floyd planning to recreate the iconic cover of ‘Animals’?