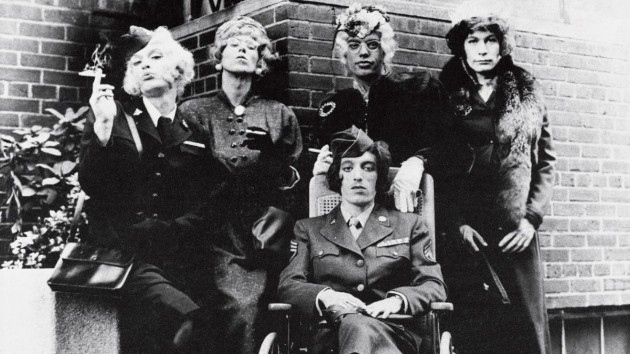 If you’re a Rolling Stones fan, you’ve no doubt seen the photo of the band members in drag on the U.S. version of the single “Have You Seen Your Mother, Baby, Standing in the Shadow?” Now, you can see that photo come to life: The original 1966 video for the song has been officially released.

Director Peter Whitehead created the black-and-white video using footage from the single artwork photoshoot.  All five original members of the band — Mick Jagger, Charlie Watts, Keith Richards, Bill Wyman and Brian Jones — are shown dressed as women, standing around on a New York City street. Well, everyone is standing around except for Wyman: He’s sitting in a wheelchair wearing a women’s military uniform, which includes a skirt and pumps.

The footage of the band in drag is intercut with a clip of Jagger walking through what looks like an art fair on the street, plus random shots of the other band members.

Along with that visual, the band has released a live performance video of the same song, also shot by Whitehead. That one — filmed on September 23, 1966 during a performance at London’s Royal Albert Hall –shows the band being mobbed onstage by screaming fans.

2022-09-23
Previous Post: Stevie Nicks on why she recorded “For What It’s Worth”: “It covers everything everybody’s fighting against”
Next Post: Mama Cass Elliott to receive star on Hollywood Walk of Fame on “Monday, Monday,” October 3