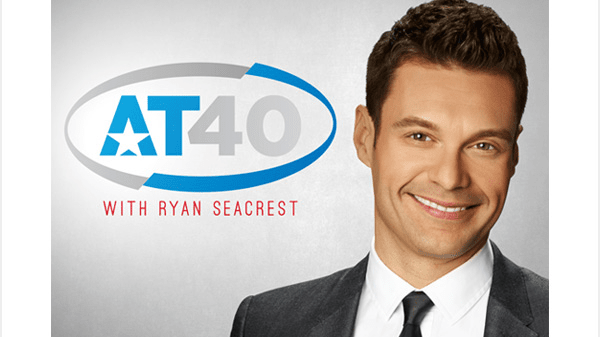 American Top 40 every Sunday 8am – Noon

Combine Hollywood’s hottest host with America’s longest running weekend countdown and you’ve got a ratings explosion called American Top 40 with Ryan Seacrest.Every week, from the heart of the music business in Hollywood, Ryan counts down from Number 40 to the hottest hit song in America. Between the music, listeners take advantage of Ryan Seacrest’s insider access to the superstars of music and entertainment, with news and gossip you’ll hear nowhere else. Recent guests include: Madonna, Jamie Foxx, Lindsay Lohan, Kelly Clarkson, Beyonce, Shakira and Rob Thomas! More than just the hits, only AT40 brings you the features you want to hear, like: the AT40 Music Minutes, AT40 Sleeze, AT40 Hookup, and the ever popular AT40 BREAK OUT!

With his thriving broadcasting career and multiple ventures in media Ryan Seacrest is at the forefront of entertainment media. While hosting and producing multiple television and radio programs, building his Ryan Seacrest Productions banner (RSP) into a viable entity creating content for all media platforms and a myriad of brand ventures, Seacrest is redefining what it means to be an entrepreneur and a quadruple threat in Hollywood.  Seacrest was honored when he was nominated for an Emmy award in the “Outstanding Host for a Reality or Reality-Competition Program” category for his work on “American Idol” in 2008 and 2009. Seacrest was also added to the list of greats who have hosted the prestigious Emmy awards in both 2007 and 2008.  Seacrest now holds preeminent positions in the worlds of broadcast television, nationally syndicated radio, local radio and cable. He is already celebrated internationally as host of the top-rated primetime talent showcase “American Idol” and the world’s most popular radio countdown show,  “American Top 40,” as well as his market-topping #1 nationally syndicated LA morning drive-time radio show for Clear Channel’s 102.7 KIIS-FM. Additionally, Seacrest executive produces and co-hosts “Dick Clark’s New Year’s Rockin’ Eve with Ryan Seacrest,” which, has spiked networks ratings and consistently won the night for viewership since his involvement with the show.

Seacrest’s RSP banner has quickly established itself as a full fledged production entity with numerous pilots, series and specials in production and development. RSP recently wrapped production on their new reality show for ABC titled “Jamie Oliver’s Food Revolution” with famed British chef, Jamie Oliver. The show centers around Oliver who will touch down in America’s unhealthiest cities and give its residents good-food makeovers using local resources. The show will premiere on March 26, 2010 on ABC. RSP has also recently aired the third season of their hit E! series “Keeping Up With The

Kardashians.” The series, which follows the lives of Hollywood socialite Kim Kardashian and her outrageous blended family, continues to be one of the highest rated series on the network. RSP’s “Kourtney and Khloe Take Miami ” debuted on E! in August 2009 and follows sisters, Kourtney and Khloe Kardashian as they move to  Miami to seek a fresh start. This show also boasts some of the network’s highest ratings.

Seacrest’s ever growing brand spans beyond media with his many entrepreneurial endeavors. He signed an extensive deal with brand heavyweight Proctor & Gamble to be the spokesperson for Crest and Scope.  Seacrest took this opportunity with Crest and Scope to raise funds for one of his philanthropic partners, Operation Smile; a medical charity whose network of global medical personal and physicians provide free reconstructive surgery to underprivileged children with facial deformities and other dental needs. Seacrest has also forged continued deals with brands such as Coke and Microsoft.  Seacrest recently announced a strategic marketing and technology alliance with Eventful, Inc.

Originally from Atlanta, GA, Seacrest’s professional career in broadcasting began at the age of sixteen when he applied for an internship at one of Atlanta’s top radio stations, WSTR-STAR 94. While working at STAR 94 he finished high school and went on to attend the University of Georgia where he majored in Journalism. Seacrest currently resides in Los Angeles, CA.