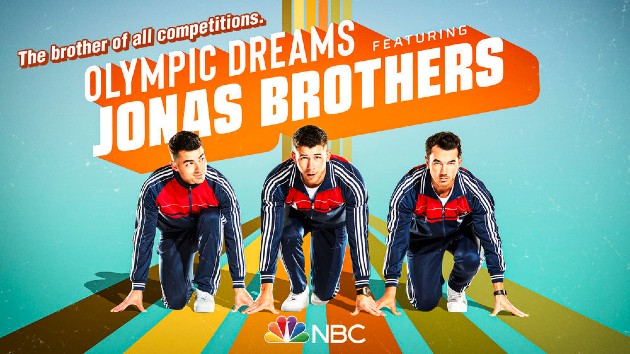 Jonas Brothers chase their ‘Olympic Dreams’ in NBC special tonight: “Everything’s a competition in this family

Nick, Joe and Kevin will go head-to-head in various Olympic sporting events, with help from some real Olympic medalists including gymnasts Laurie Hernandez and Nastia Liukin, and BMX rider Alise Willoughby. The brothers say it was a “humbling” experience but they were ready to take on the challenge.

“This is definitely a dream for us competing [in] Olympic level events, we’ve always dreamed of this and competing against each other,” Joe says.

Nick agrees, adding, “I think it’s safe to say we knew this day would come. So while it was a dream, we were preparing mentally, physically and emotionally for this moment for our entire lives.”

While they wouldn’t say which brother is the most athletic — you’ll have to watch to find out — they did tease that they were each in it to win it.

“I think the competitive nature between the three of us is very high, no matter what it is that we’re doing,” Kevin says. To which Nick adds, “Everything’s a competition in this family.”