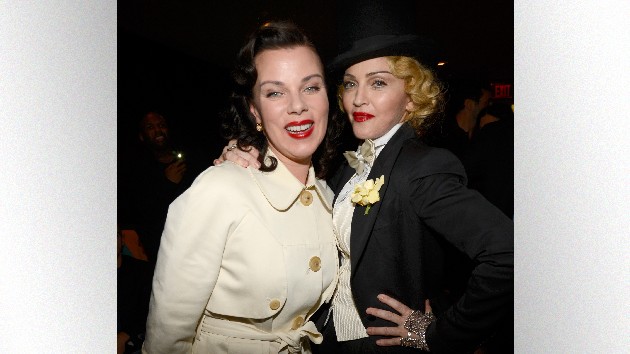 Last week, there was speculation that Madonna planned to cast actress and model Julia Fox in her upcoming biopic, after Madonna was seen hanging out with Fox, her boyfriend Kanye West and other stars at a club in L.A. While most of the speculation was that Madonna wanted Fox, who’s known for her role in 2019’s Uncut Gems, to play her in the film, it turns out Fox is indeed being considered, but for another part entirely.

Entertainment Weekly reports that Madonna is interested in Fox playing the role of her longtime friend, actress Debi Mazar.  In the past, Fox’s looks have been compared to Mazar’s, and the two even did a joint interview this past August.

Mazar, best known for her roles in Goodfellas, Entourage and Younger, has been friends with Madonna since they met in an elevator at New York’s Danceteria nightclub in the ’80s.  She later appeared in the videos for Madonna’s hits “True Blue” and “Music.”  A rep for Madonna declined to comment to EW about the casting.

As for who will play the Queen of Pop herself, the British tabloid The Mirror claims that Madonna’s eldest daughter Lourdes, 25, is actually being considered for the part.  Lourdes, who’s worked as a model in recent years, closely resembles her mother as a young woman.  Of course, since it’s a British tabloid, take that news with a grain of salt.

There’s no word on when Madonna’s film will begin shooting — she posted a note saying the script is “almost finished” in October.