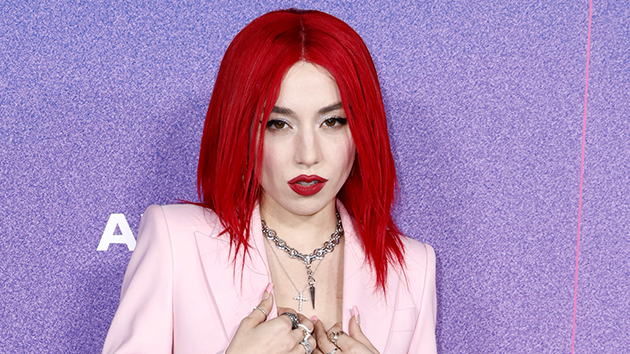 ﻿Justin Timberlake﻿’s role in ﻿Candy﻿ was “accidental,” says wife and series star ﻿Jessica Biel﻿.  “Justin was reading the scripts,” and was interested in the character Steve Deffibaugh, she told ﻿Entertainment Weekly﻿﻿.  “He said, ‘I want to play this part.’ And I said, ‘Yeah. Okay.’ He goes, ‘No, no. I want to play this part,'” she recalled.  Justin didn’t want a paycheck, only for producers to pay for his wig and prosthetic potbelly, which they did.  Candy is streaming on Hulu.

If you want to add Ava Max‘s clothes to your closet, you’re in luck.  The “Maybe You’re the Problem” singer is giving one lucky fan the sparkling belt she wore on the single’s promo art.  All you have to do to enter is pre-save or pre-add her upcoming album, Maybe You’re the Problem.  Runners-up will get hooked up with temporary tattoos, per the contest website.

Harry Styles only recently released his single, “As It Was,” and it’s already RIAA-certified Platinum.  It was the first single released off his forthcoming album, Harry’s House, which arrives next Friday, May 20. The British singer enjoyed another honor, seeing his song “Treat People with Kindness” sell over a half-million copies, earning it Gold status.

Camila Cabello says she’s moving to Spain.  She shared an article from Vice to her Instagram story that read, “Spain set to announce three-day menstrual leave for women.”  Camila said in an added comment, “I’m moving.”  Chances are she’s only joking.

Ed Sheeran loved a fan remix of his song “2step” so much, he had to show it to everyone.  He revealed on his Instagram story, “Saw this remix online and loved it so much, had to make it official.”   The remix, which features artist Star One, is available to download and purchase now.