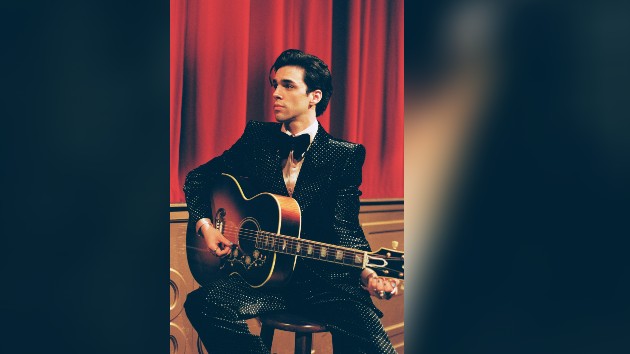 Stephen Sanchez is following up his global hit “Until I Found You” with another throwback-sounding track, “Evangeline.” It’s no wonder it sounds retro — it samples a song that came out in 1968.

Explaining how the song came together, Stephen says in a statement, “The song lyrics were written by myself, Trent Dabbs, and Nick Lobel. Nick Lobel sampled the 10-second intro of Bobby Goldsboro’s song, ‘Honey,’ and put together a verse and chorus for me to hear in the studio.”

“Once I heard that, I felt immediately inspired,” Stephen continued. “The song came to life in 15 minutes. Sampling is not something I’ve ever done nor have I felt moved to pursue, but it was honestly a happy accident that day. Even the way I performed it was extremely new for me. This song really made music fun for me again. It’s opened a world and lore I’m excited to invite fans into.”

“Honey,” sung from the viewpoint of a guy reminiscing about his late wife, was a huge number-one hit for Goldsboro, selling 1 million copies in three weeks. It’s also received the dubious distinction of being called “the worst song of all time.”

Stephen debuted “Evangeline” on The Tonight Show Starring Jimmy Fallon on Tuesday night. In the song, he offers to give a girl whatever she needs “just to make you mine.” He sings, “Don’t go to sleep/ don’t rest your head/ I’ll be the pillow, and I’ll be the bed/ holding your dreams as you lie to rest, Evangeline.”

Meanwhile, Stephen announced a North American headlining tour for the fall, kicking off October 13 in Indianapolis, Indiana, and wrapping up December 18 in Richmond, Virginia. Tickets go on sale Friday at 10 a.m. local time via stephensanchezofficial.com/tour.

2023-01-25
Previous Post: Ava Max almost quit music in 2018: “I had a mental breakdown”
Next Post: Britney Spears not in any danger after concerned fans call police to her home