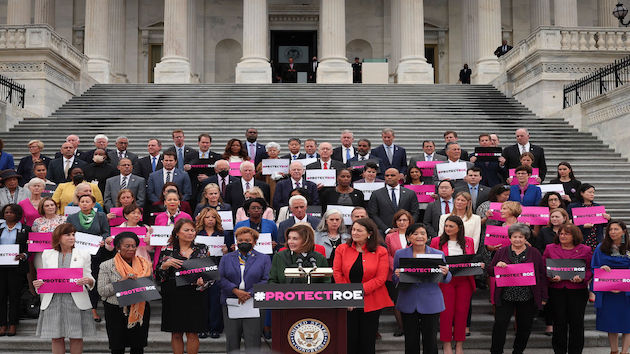 (WASHINGTON) — House Democrats, led by Speaker Nancy Pelosi, gathered on the steps of the U.S. Capitol facing the Supreme Court on Friday, calling on the justices to defend access to abortion on the eve of abortion rights protests in Washington and nationwide.

It comes after the unprecedented leak last week of a Supreme Court draft opinion that would overturn Roe v. Wade followed by Senate Democrats’ failure to codify abortion rights into federal law on Wednesday.

“Americans are marching and making their voices heard,” Pelosi said. “Public sentiment is everything. We will never stop fighting for patients and their health care.”

Pelosi said Republicans around the country have already mobilized a “dangerous” and “extreme” agenda to criminalize all forms of reproductive healthcare — referring to the conservative push for a nationwide abortion ban — even though Senate Minority Leader Mitch McConnell has said he would not try to break a Democratic filibuster to block a ban should Republicans take control of Congress.

She warned, because Roe is based on a constitutional right to privacy, that other similar rights such as same-sex marriage and contraception would be stripped from Americans if Roe case is overturned.

Rep. Judy Chu, D-Calif., sponsor of the Women’s Health Protection Act, commended her colleagues for passing her House bill in September that would provide a national right to abortion, calling it the “most supportive” reproductive rights bill in the history of Congress.

“Even though Senator Manchin did not join, all of the other 49 Senate Democrats did. I also want to talk about that to so called pro-choice Republicans who voted against whip-up because they said our bill goes too far. Well, that’s not true. It does exactly what we need it to do — uphold Roe versus Wade.”

Rep. Barbara Lee, D-Calif., co-chair of the congressional Pro-Choice Caucus, said Republican lawmakers are “out of step” with Americans’ views because a majority of them support abortion access and personal liberty to make their own decisions regarding their reproductive health care.

“This is personal for many of us,” said Lee. “It’s personal for me, because I know firsthand what being denied access to legal abortion looks like. I have personally experienced the fear the stigma, the trauma, the despair, of being denied the care that you need. I know what it’s like to have your medical decisions criminalized to be forced to travel for the care that you need and to see your future hang on the decisions of politicians rather than doctors.”

Reps. Diana DeGette, D-Colo., and Carolyn Maloney, D-N.Y., called on Americans to mobilize for the approaching midterms in November.

“I am proud to stand with my Democratic colleagues and with our speaker,” said Maloney. “We are united in our resolve to defend abortion rights in this country with our like minded men and women. And it’s time to take America forward again.”