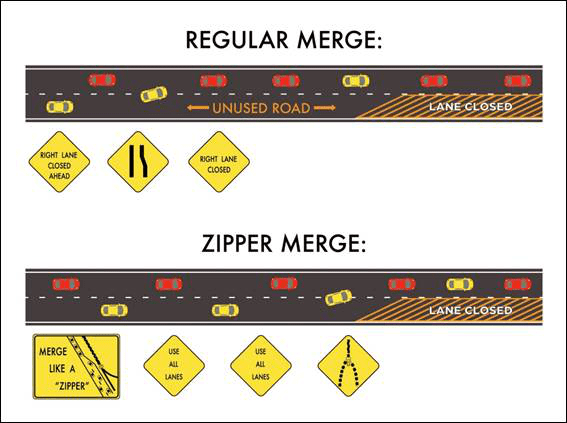 NMDOT introduces a Zipper Merge- Are You Doing It Right?

The right way to merge in construction zones

SANTA FE – The New Mexico Department of Transportation is introducing a new way to merge in New Mexico.  It is called a Zipper Merge. It is a more efficient way for traffic to move through construction zones.

Most drivers start to merge as soon as they see warning signs a lane is closing ahead.  This is called an “early merge” which can lead to dangerous lane switching, inconsistent driving speeds that cause crashes, long back-ups and angry drivers.

Research shows these dangers decrease and traffic moves more efficiently when motorists use both lanes until the merge point then take turns moving into the open lane.  This is known as a Zipper Merge.

A Zipper Merge reduces the overall length of traffic backups by as much as 40 percent and creates a sense of fairness for drivers moving at the same rate of speed.

Department of Transportation Cabinet Secretary Mike Sandoval said, “This is new for our state.  It requires drivers to merge in a way they may not be used to.  However, over time, drivers will realize it will get them through quicker and more fairly.  We want drivers to take a deep breath and drive with courtesy. We look out for each in New Mexico.  It’s our way.”

With the Governor’s initiative to bolster infrastructure, more construction will take place around New Mexico. The NMDOT wants motorists to get where they are going as safely and efficiently as possible.  A Zipper Merge has been proven to alleviate traffic and reduce crashes on the roads.

For more information go to www.zippermergenm.com or click here for an instructional video on how to do the Zipper Merge.