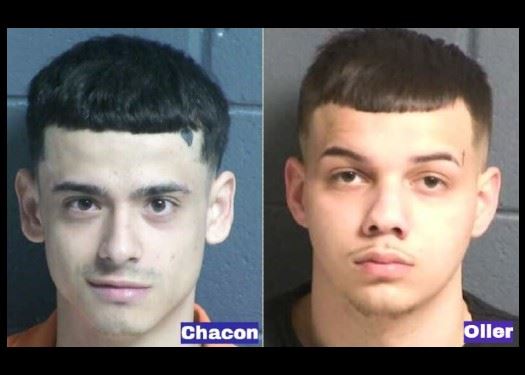 About 9:30 p.m. on Wednesday, March 4, Las Cruces police were dispatched to the report of shots fired at an apartment on 2200 Stern Dr. Officers arrived to find several bullet strikes on the exterior of one of the apartments. No injuries were reported.

Investigators learned the occupant of one of the apartments had been in contact with Chacon, on social media, to purchase a form of illegal narcotics. The deal reportedly fell through and Chacon felt disrespected. The two men allegedly exchanged words on social media before Chacon and Oller went to the victim’s apartment on the pretense of fighting the victim. Instead, investigators learned, Chacon and Oller fired multiple rounds into the side of the building.

Police determined the apartment building was struck approximately 21 times though officers recovered only four 9mm shell casing from outside the apartment.

On Thursday, police learned Chacon’s gray Mercedes was parked outside the WoodSpring Suites at 2080 S. Triviz Dr. Just outside of the vehicle, officers found several 9mm shell casings and more shell casings were observed inside the car. Police made contact with Chacon and Oller as they left the hotel.

Investigators obtained a search warrant and located more than a dozen 9mm shell casings from inside Chacon’s car. Investigators also recovered two 9mm handguns during their search – one in Oller’s possession and the other that was located inside the hotel room.

Chacon and Oller were both originally charged with felony counts of possession of marijuana with intent to distribute. They were charged for the shooting on Friday. Both men are initially being held without bond at the Dona Ana County Detention Center.